Georgina Hindle, new Bordeaux correspondant for Decanter Magazine, paints a superb portrait of the universe of Poyferré for her loyal readers.

This beautiful article presents the profiles that embody the future of Bordeaux. Among them, Château Léoville Poyferré. Georgina Hindle masterfully evokes the wines that have been the glory of the property for decades, its strong, united team without which nothing would be possible, but also its history, a heritage of a thousand riches.

A heartfelt thank you for this wonderful spotlight on our Château. 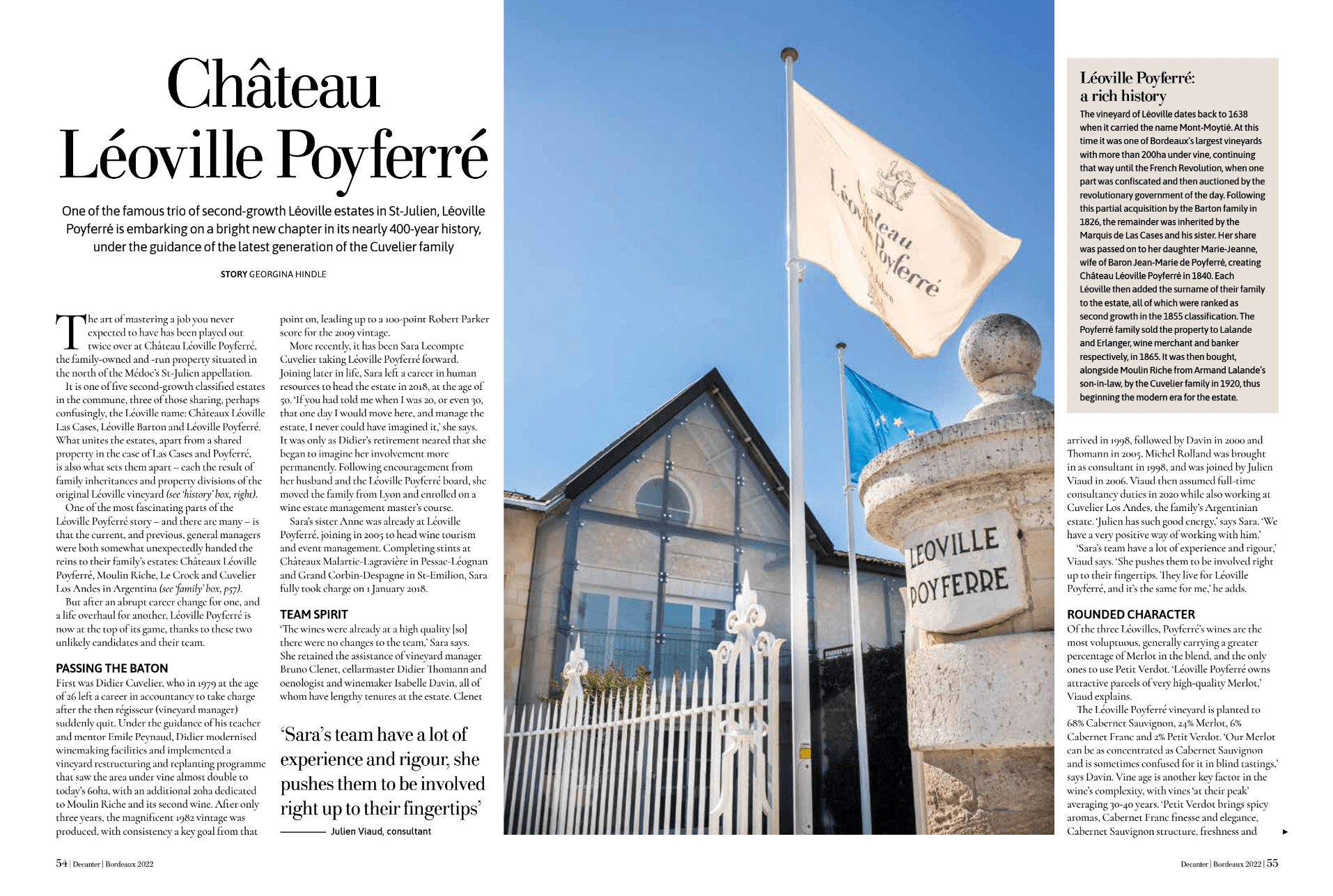 One of the famous trio of second-growth Léoville estates in Saint-Julien, Léoville Poyferré is embarking on a bright new chapter in its nearly 400-year history, under the guidance of the latest generation of the Cuvelier family.

The art of mastering a job you never expected to have has been played out twice over at Château Léoville Poyferré, the family-owned and -run property situated in the north of the Médoc’s Saint-Julien appellation. It is one of five second-growth classified estates in the commune, three of those sharing, perhaps confusingly, the Léoville name: Châteaux Léoville Las Cases, Léoville Barton and Léoville Poyferré. What unites the estates, apart from a shared property in the case of Las Cases and Poyferré, is also what sets them apart – each the result of family inheritances and property divisions of the original Léoville vineyard (see ‘history’ box, right).

One of the most fascinating parts of the Léoville Poyferré story – and there are many – is that the current, and previous, general managers were both somewhat unexpectedly handed the reins to their family’s estates: Châteaux Léoville Poyferré, Moulin Riche, Le Crock and Cuvelier Los Andes in Argentina (see ‘family’ box, p57).

But after an abrupt career change for one, and a life overhaul for another, Léoville Poyferré is now at the top of its game, thanks to these two unlikely candidates and their team. 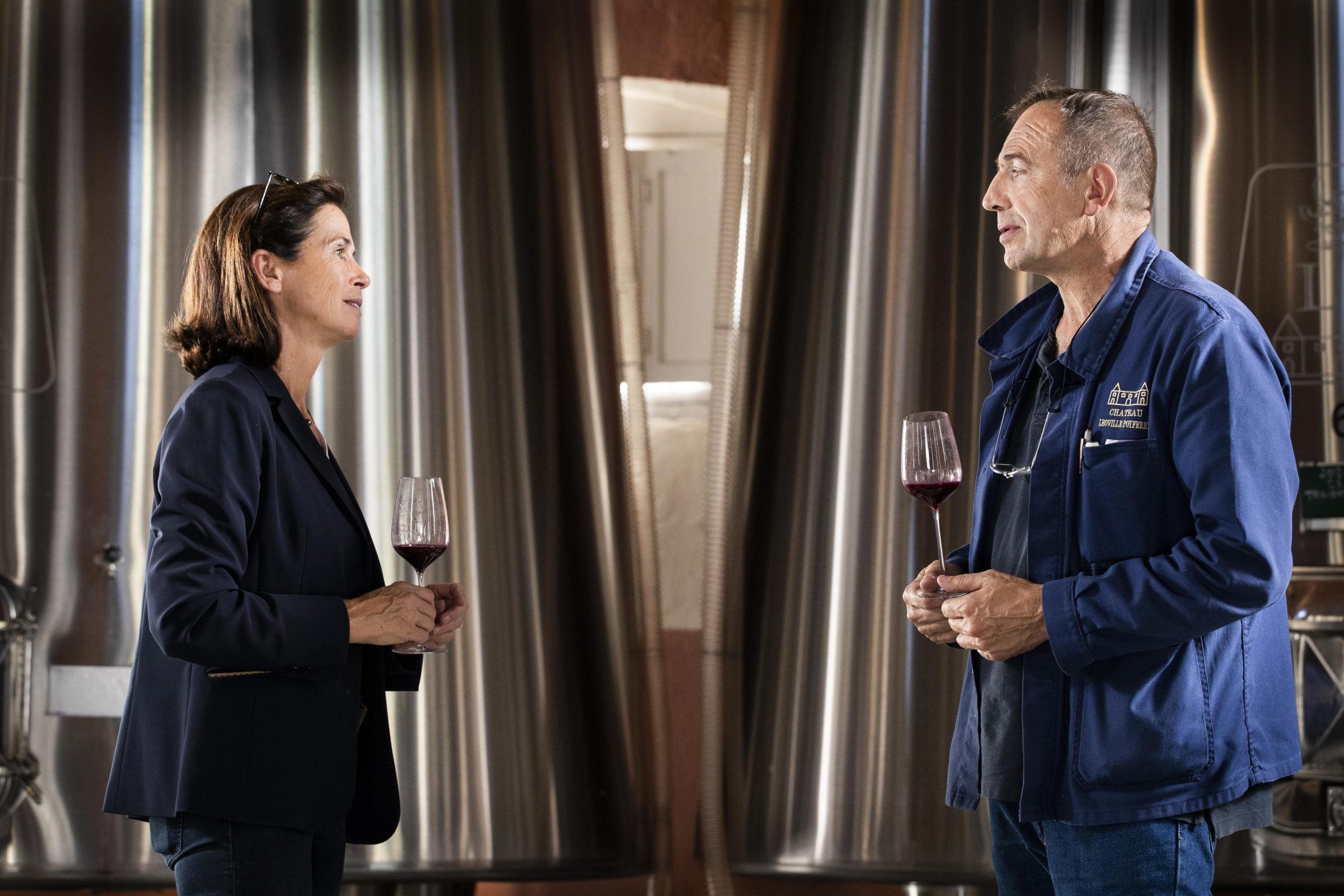 First was Didier Cuvelier, who in 1979 at the age of 26 left a career in accountancy to take charge after the then régisseur (vineyard manager) suddenly quit. Under the guidance of his teacher and mentor Emile Peynaud, Didier modernised winemaking facilities and implemented a vineyard restructuring and replanting programme that saw the area under vine almost double to today’s 60ha, with an additional 20ha dedicated to Moulin Riche and its second wine. After only three years, the magnificent 1982 vintage was produced, with consistency a key goal from that point on, leading up to a 100-point Robert Parker score for the 2009 vintage.

More recently, it has been Sara Lecompte Cuvelier taking Léoville Poyferré forward. Joining later in life, Sara left a career in human resources to head the estate in 2018, at the age of 50. ‘If you had told me when I was 20, or even 30, that one day I would move here, and manage the estate, I never could have imagined it,’ she says. It was only as Didier’s retirement neared that she began to imagine her involvement more permanently. Following encouragement from her husband and the Léoville Poyferré board, she moved the family from Lyon and enrolled on a wine estate management master’s course.

‘The wines were already at a high quality [so] there were no changes to the team,’ Sara says. She retained the assistance of vineyard manager Bruno Clenet, cellar master Didier Thomann and oenologist and winemaker Isabelle Davin, all of whom have lengthy tenures at the estate. Clenet arrived in 1998, followed by Davin in 2000 and Thomann in 2005. Michel Rolland was brought in as consultant in 1998, and was joined by Julien Viaud in 2006. Viaud then assumed full-time consultancy duties in 2020 while also working at Cuvelier Los Andes, the family’s Argentinian estate. ‘Julien has such good energy,’ says Sara. ‘We have a very positive way of working with him.’

‘Sara’s team have a lot of experience and rigour,’ Viaud says. ‘She pushes them to be involved right up to their fingertips. They live for Léoville Poyferré, and it’s the same for me,’ he adds.

Of the three Léovilles, Poyferré’s wines are the most voluptuous, generally carrying a greater percentage of Merlot in the blend, and the only ones to use Petit Verdot. ‘Léoville Poyferré owns attractive parcels of very high-quality Merlot,’ Viaud explains.

Aerial analysis and soil studies led to the introduction of more specially adapted rootstocks – meticulously selected by Clenet from five different suppliers – and of different intra-plot processes, pruning and harvesting plot by plot. This is matched with increased precision in the winery, using vats of varying sizes.

While ‘the only problem with the most recent 2021 vintage was the yield’ – a low 23hl/ha, as opposed to a more normal 45hl/ha – this did allow the team to use smaller tanks, for greater precision. There are now 57 temperature- controlled stainless steel tanks (up from 35 in 2010) ranging in capacity from 15hl to 180hl. Grapes are sorted twice, manually and via an optical sorter, since 2011, before pre-maceration cold fermentation to retain freshness and purity of fruit. Malolactic fermentation takes place in new French oak before the wine is aged for 18-20 months in 80% new oak. 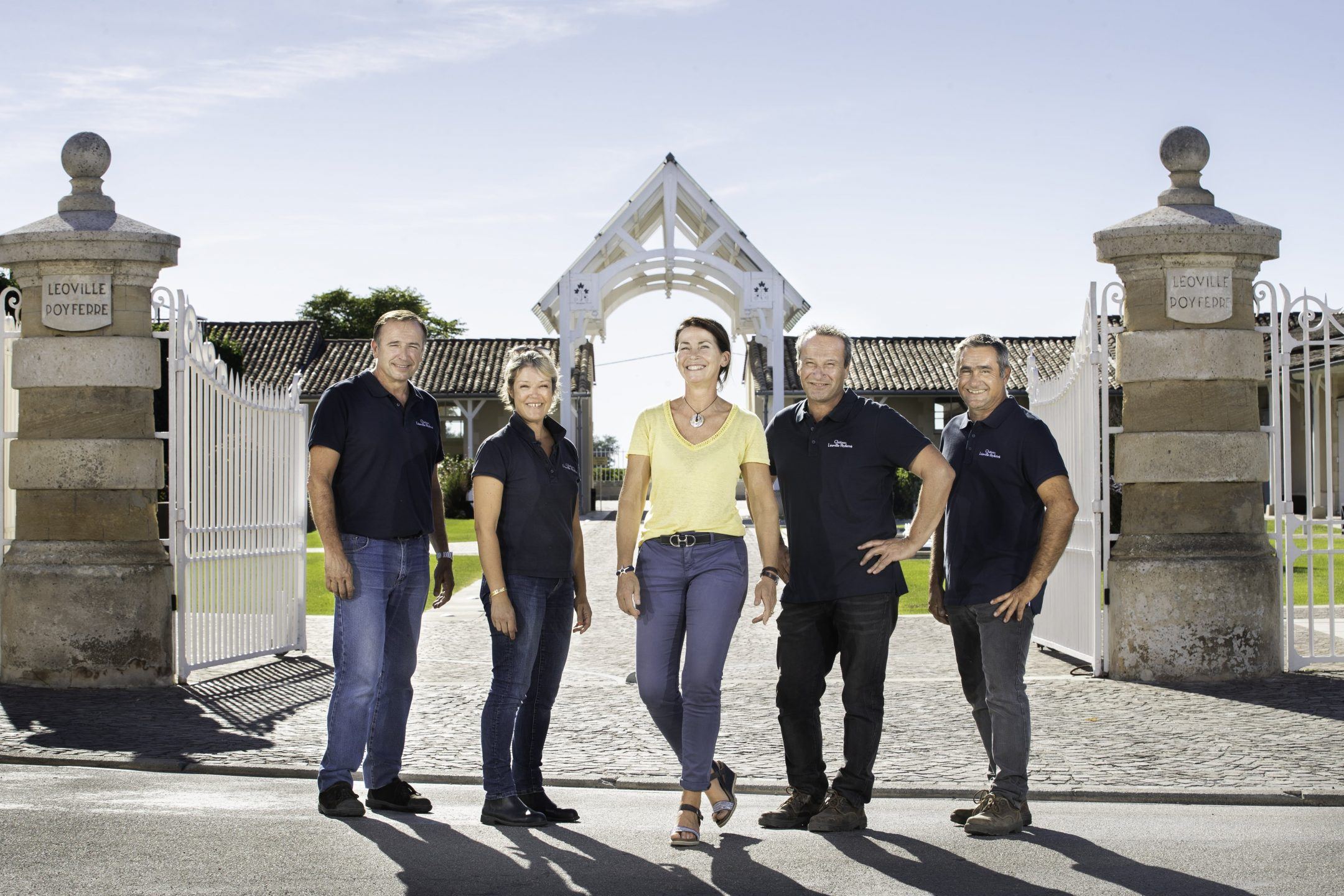 When asked their favourite vintages, Sara alights on 2011, referring to it as a ‘magnifique vintage’ that wasn’t well received at the time but now outperforms 2012 in terms of consumer preference, and as such commands higher prices. For me, a highlight of the tasting was 2005, and yet Davin laments that if they had only had the technology and equipment they have now, the quality could have been even better.

All of the wines display energy and power alongside elegance and class – indeed the latter two were words I wrote on the whiteboard wall of their tasting room before ending my visit. Detail, precision, concentration and finesse, each expressed through the conditions of the vintage.

A TASTE OF THE FUTURE

Since arriving, Sara has concentrated efforts into marketing and communication, social media and tourism – prior to Covid, the estate welcomed up to 7,000 visitors annually. ‘We want to be accessible,’ she says. Also offered are international shipping services for exclusive back-vintages available only at the château.

New labels have been designed in order to better distinguish the grand vin and second wines of both Léoville Poyferré and Moulin Riche, and celebrations to mark 100 years of family ownership – put on hold due to Covid – will take place in several cities around the world later this year.

Sara’s goal to raise the estate’s reputation seems to be on track. As Matthew O’Connell, CEO of LiveTrade and head of investment at Bordeaux Index, says: ‘It’s a well-followed, top-25 château, and demand has been pretty strong – trading on our LiveTrade online platform was up around 40% in 2021.’

‘Some people call us une belle en dormis (‘a sleeping beauty’), because we’re not so known,’ says Sara. ‘All the classified estates are working to strengthen their brands and we must do the same. We take nothing for granted – you have to prove yourself.’ Judging by the quality of the 2018, 2019, 2020 vintages, and the excellent 2021, the team at Léoville Poyferré are certainly doing that. 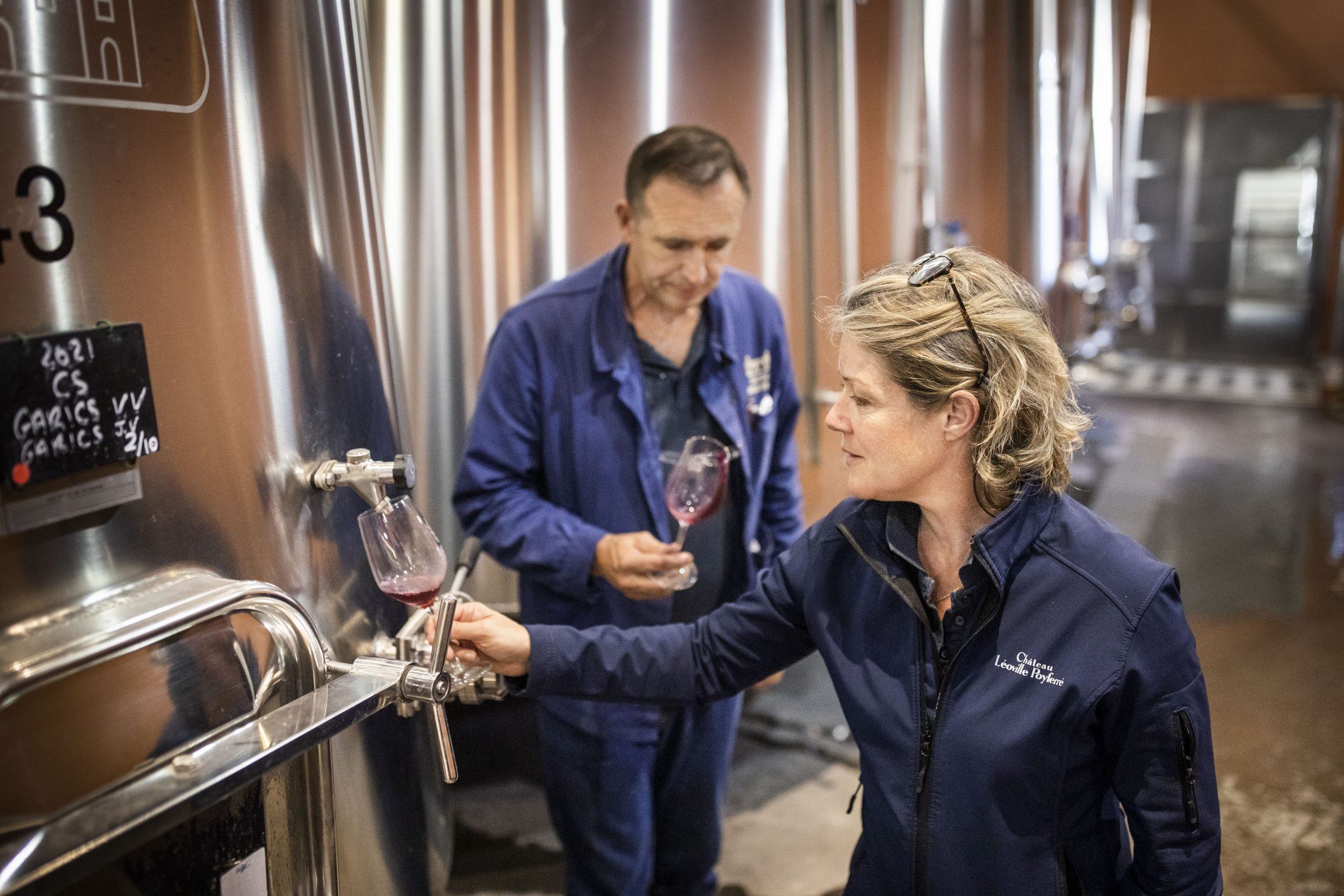